Migration possible in the future?

Hello to the community.

After a few months I finally managed to acquire all of the components for my build-to-be.
I am on a tight budget here and this is going to be a small home file server NAS consisting of new and old (re-used) parts. Here is the breakdown:

When testing my system I unfortunately found out that one of the DIMM slots on the motherboard has gone bad; hence resulting in only having 4GB of RAM usable.
The data disks (WD Reds) are to be setup in RAID1.
Let the questions begin:

Welcome to the community!

I have been running Rockstor on a HP Proliant Gen8 with a dual core G1610 Celeron in it without a hitch. I recently ran into another RAM bar so I’ve upgraded from 4GB of RAM to an extremely roomy 6GB, but even with 4GB I had no issues. And that’s with running a bunch of Docker containers (Plex, Radarr, Sonarr, Jackett, Transmission, MariaDB, some websites). I think you’ll be fine in that regard.

Worst case, your OS might run out of enough memory to give everything oodles of cache.
Currently, my system is actually using less than 3GB of RAM, with most of the rest used as cache: 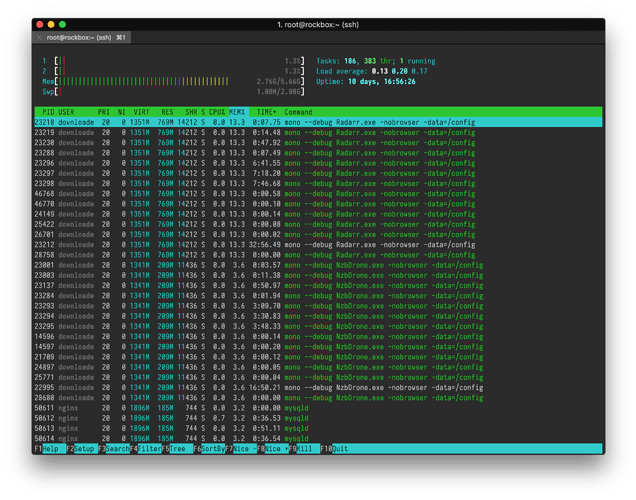 You don’t want your motherboard doing RAID for you, that’s Rockstor’s job. I’m not entirely versed on IDE vs AHCI, but a quick google tells me you want the latter since that’s the more modern variant.

That is correct. RAID one always means “total capacity / 2”.

In the not so near future; I plan on upgrading my motherboard and maybe my processor as well. How easy will it be for my data drives to be recognised in a new Rockstor installation with different motherboard (storage controller)? Does it make sense to build the whole thing now (old hardware) or will I run into trouble afterwards? I really can’t afford losing my data.

The actual data is stored on your WD Reds, which are going to be setup in a standard BTRFS pool. You could theoretically completely change OS’es, and as long as the OS you switch to knows BTRFS, your data will be there.

What Rockstor does is offer the web UI and keeping track of Samba shares, Docker containers and whatnot. Since it’s a fairly standard CentOS install with a few tweaks and the extra UI software, as long as CentOS supports your new hardware, you’ll be fine when switching things around. The only “maybe” here is really really new hardware in combination with the somewhat older kernel Rockstor uses, but you can always use a newer kernel. So I really wouldn’t be too worried there, either.

Thank you for the informed reply and sorry for taking so long to answer back. Unfortunately free time is only weekend time.

Being a total newbie on linux; the new kernel process can be done only on first installation or I can do it afterwards as well?

You can’t do the “newer kernel thing” on install, only afterwards, which is fine. I’d say the provided kernel should have no issues supporting your hardware. By the time you’re up for hardware upgrades, you could check to see if a kernel upgrade is actually needed (because your newer hardware requires it and it wasn’t done in Rockstor itself yet).

I wouldn’t worry about it too much, for now.

Thank you for the info.
I will go with my current config for the time being and see how it goes.