In the past few days I’ve been working on a new feature for the shutdown and suspend tasks that can be scheduled in the web interface. I’ve already opened an issue (#2038) and have written a bit about how I think such a feature should and could work.

If there’s no response at all, it is possible to let the system perform several attempts before shutting down. The user is able to configure how many attempts are being made and how long to wait between them.

I’ve tried to integrate everything neatly with the existing fields: 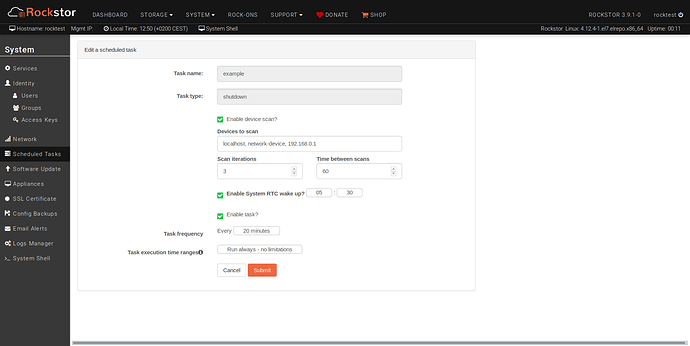 I’ll open a pull request and would be very happy if someone could have a look at it – I’m neither experienced with Javascript nor Python, so probably I’ve made some (possibly severe) mistakes.

I’m completely open to suggestions regarding the feature and also the implementation using ICMP echo requests. It’s working reliably for my own setup, but how is the situation for other installs? Are all your devices configured to respond to ping requests?

Also, I’m currently testing on openSUSE, but as far as I know the ping command behaves exactly the same, so there shouldn’t be any problems at run time.

I really like this idea, hopefully we will get some more input on it.

I think the ping idea is sound as most devices respond appropriately there.

I’m a bit confused about the contents of the “Devices to Scan” box, especially given it’s localhost contents.

Thanks, much appreciated. You might want to take a look at the following thread and specifically this post where the current known caveats for building on Tumbleweed are summarised:

@Flox This now very much looks to be the case, with your report. My instance of postgres user’s ‘.bash_profile’ appears to date from June 2018: -rw-r----- 1 postgres postgres 192 Jun 9 2018 .bash_profile So I’m guessing it was a post install script of an earlier postgresql-server rpm or the like that generated it. It is not owned by any current package. And once in place was, via policy for such things, left as was. Nice to know anyway. Lets move to conclude this then. Given the current …

and of course our recently updated (via the above thread) wiki on the same which I assume you have already found:

This document represents the current and pending state of our move to openSUSE as our linux distro base for Rockstor and is not an endorsement of it’s use or support status but is simply intended to share the progress and development made to date. It is intended as a developers document so any changes made should be in accordance with keeping this text up to date with the current code state, including in this case pending pr’s. If you wish to comment on our openSUSE move in general, as opposed …

Also take care with your CentOS testing that you remember to uninstall the rpm package before doing clean builds. I see an iso release number showing which would indicate that there is still an rpm installed. Shouldn’t affect things but on a source only install it would read “ROCKSTOR UNKNOWN VERSION”. Also if you don’t build in /opt/rockstor (I use /opt/rockstor-dev) then their is provision to move to rpm installs from a prior source install once your modifications are merged and released via rpm.

Hope that helps and that we get some feedback on this proposed feature. Well done on getting so far with it already and looking forward to the pull request.

I’m a bit confused about the contents of the “Devices to Scan” box, especially given it’s localhost contents.

My bad! To be honest, it simply was the first hostname that was coming to my mind. In a real environment, the box should contain a comma separated list of devices to be pinged, either their hostname if known or their IP address.