I have 2 brand new 2TB sata drives installed on a newly installed Rockstor.
For same reason after I’m hitting the “submit” in the “Tick to Wipe” screen the disk are not being formatted. The “?” next to disk name not changing to wheel symbol for me to create pools.
Do I have to first format the drives or create partition under windows or Linux?
What am I missing? 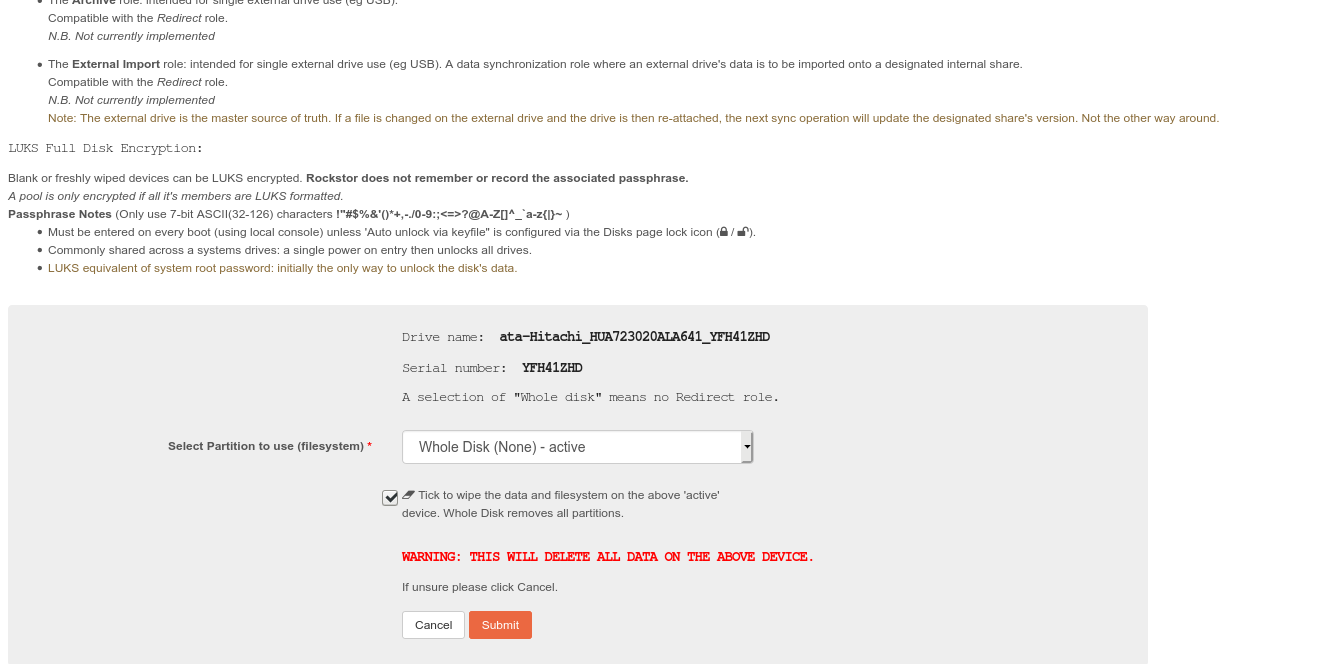 The “?” next to disk name not changing to wheel symbol for me to create pools.

It’s actually the other way around. If you have the wheel / cog / gear symbol it means the disk is NOT ready as they stand. The question mark is meant to indicate that there is now a question on how you wish to use them. That’s because the wipe screen that you have visited and re-wiped, as they are already wiped, also offers the one off opportunity to apply LUKS or other planned roles.

So in short you should now be good, with the question mark showing, to go ahead and create your pool. There after the options available at this early state will be removed and there will no longer be a question mark as the drives lowest level use decisions have then been declared.

I think what we have here is a failure on our part to keep the docs up to date, specifically the following documentation entry: Disks where there are no question marks in sight. But we do see an indication of the question mark and a reference to it within text in our slightly newer section on LUKS: LUKS Full Disk Encryption.

I have created a new issue in our Documentation GitHub repository to address this short fall:

Thanks to forum member meazz1 in the following forum thread for highlighting this issue. We have not yet updated our Disk...

In short it looks like you should be good to go as is. I’ve made a note in the above doc issue that we may be able to improve our tooltip message with regard to the question mark which currently reads:

With the optional element being the key here. It’s assumed if one wants, at this stage, to do LUKS etc, then that is an option. Otherwise one can proceed to creating a pool. It’s also the case that disks that aren’t ready i.e with a cog / gear wheel, don’t show up on the pool creation page. Your’s with their question mark, should now show up.

@meazz1 Just a quick note re:

… disk are not being formatted.

The disks as this stage, just post a wipe, are actually just blank. The formatting, as btrfs pool members, takes place when you create a new pool with them or they are added to an existing pool.

Just to help clarify what’s going on. And in the case of whole disk use (much preferred and the default) there is also no partition table. The disks are used ‘raw’ without any partitions or partition table to mange those partitions. It removes a whole layer of complexity that way and makes things easier to manage.

Thanks, it’s all good now. I followed your suggestion.