Hi again. I’m replacing another disk (4TB) with a larger one (8TB) as it has become available.
Over 90 minutes after the rebalance started, nothing seems to be happening. I know it’s going to take a while, because I’ve already replaced one.

Anyway, nearly 2 hours after starting, 0% progress, and the new drive is still showing 1GB allocated. The new pool size is showing correctly though.

(The last time, I added the 8TB (WKD391VC) to /dev/sde first, and after removing the 4TB it replaced, and rebalanced, shutdown and moved the new drive to the old drive’s position. From this I figured that the drives are identified by their serial number, not which file in /dev they are mapped to… maybe I was wrong… but, everything started fine before adding the disk to the pool.)

See both the existing 8TB drive (WKD391VC, not the one being replaced, but the previous one added) and the new one ( ZA1FZPBY ) are showing unknown power status. 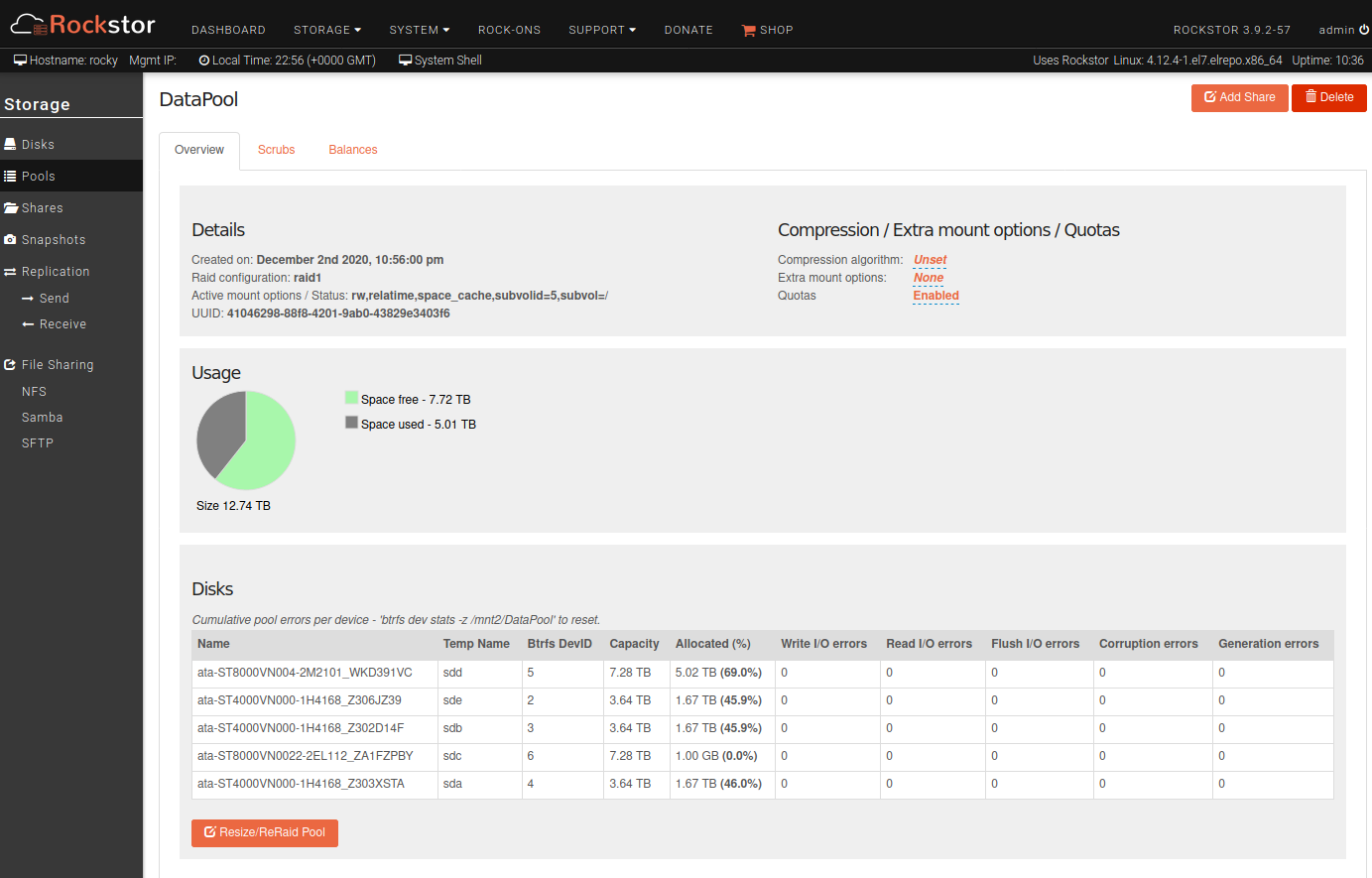 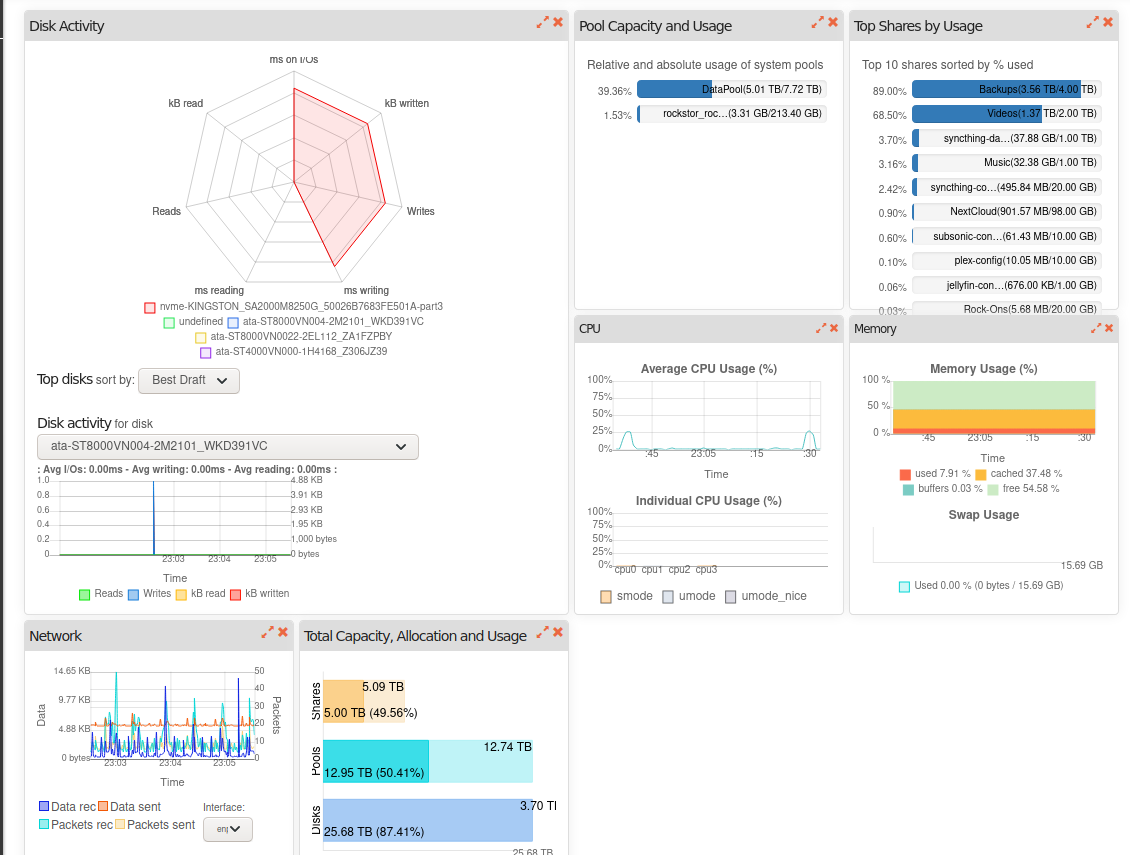 See how quiet the disks are. I would expect a flurry of writing going on. 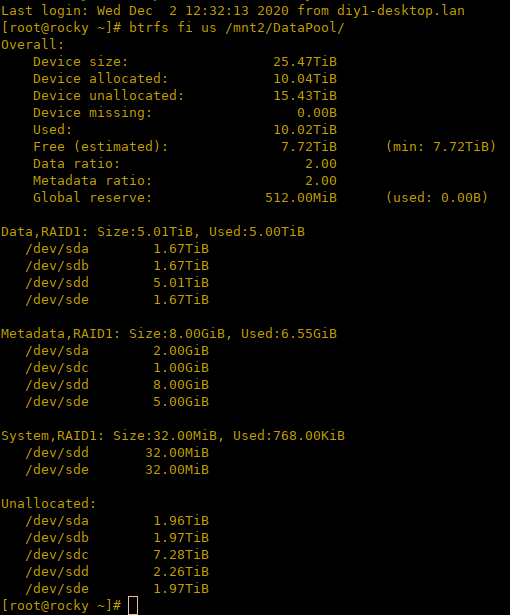 What’s the best way to deal with a hung re-balance?
(Fortunately I have backup copies of the data…)

I’ve tried a btrfs balance pause, and that just hung.

As btrfs balance pause, and btrfs balance cancel both hung, I tried shutting down, but that seemed to be hung on the balance that wasn’t progressing. So…
power button with extreme prejudice.

Restarted, and the logs show that it noticed things weren’t right, and seems to be fixing sda at the moment. And data seems to be moving onto the new disk.

I’m going to leave it overnight. 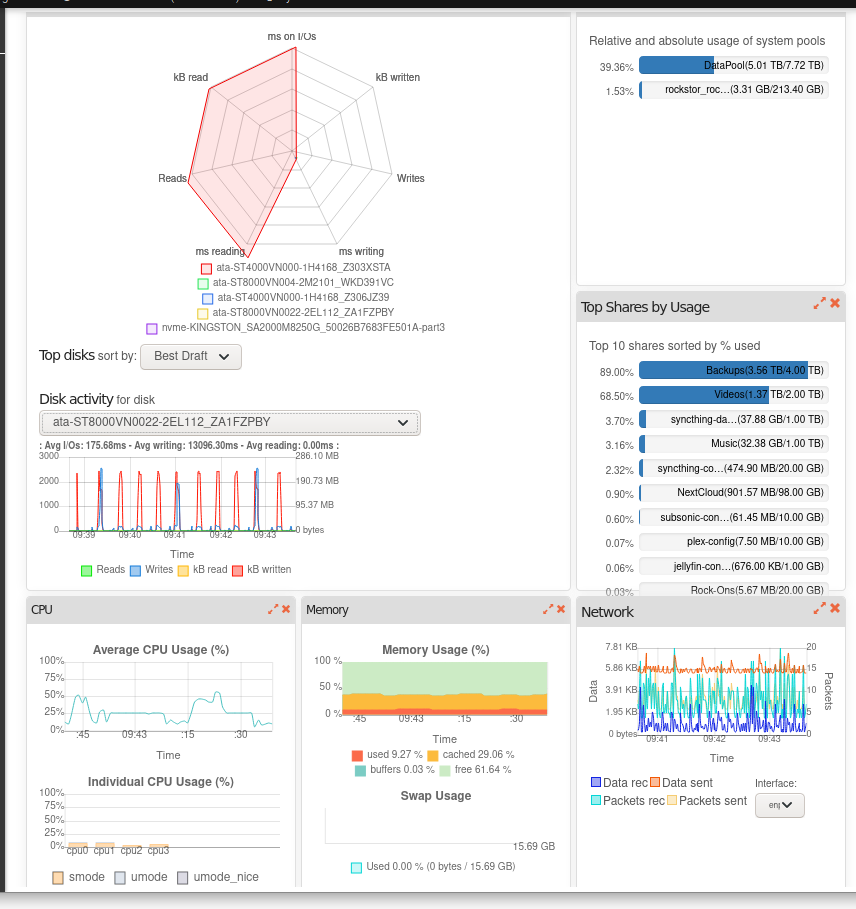 See the difference in disk IO and CPU. 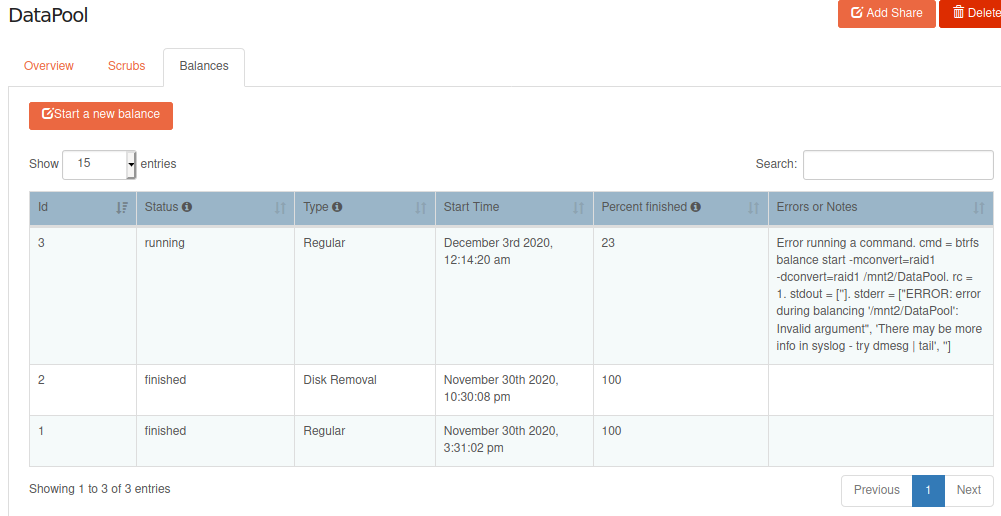 I haven’t found anything in the logs yet for the failed balance start cmd, but I’m positive things were stalled last night. I really tried to look for signs of life.

I did find this thread on reddit. One user says a single block can take a long time, and to wait up to an hour after cancel. OP waited several.

Just given me an idea for a dashboard widget to show task progress (e.g. balance, scrub) and maybe a ‘top’ widget.

Anyway, not much to go on, really, but now that it’s moving, I’m happy, so we can leave it.
Just sharing my experience as a new user (who is learning).

@HarryHUK Thanks for the details report and status update.
Re:

Take a look at my recent response to a similar question from @Noggin recently:

@Noggin Sorry I’ve not got much time on this one but re: Quite possibly. You still need to scrub the pool, as you tried but I suspect you have either bad PSU or bad ram. Investigate those before you try anything else at the OS level as with bad hardware all OS/fs stuff is essentially doomed. Not necessarily. I would say if you don’t need AD then definitely go with the openSUSE as it’s btrfs core and kernel are years newer and given btrfs has seen some significant imporovements in this time I…

Am I correct in assuming that CentOS is more stable than OpenSuse?

Not necessarily. I would say if you don’t need AD then definitely go with the openSUSE as it’s btrfs core and kernel are years newer and given btrfs has seen some significant imporovements in this time I would definitely go for the openSUSE variant via the DIY installer build method:

I am delighted, and somewhat relieved, to finally announce after more than 2 years of transition from our CentOS base, our first BETA release within our “Built on openSUSE” only testing channel. We are, as yet, not quite at feature parity with our prior CentOS variant (Stable Channel) but getting very close. The intention is to finally offer a Stable Channel rpm for our “Built on openSUSE” rpms once we have this final beta testing phase completed successfully. As always there are wrinkles and o…

Many thanks for your reply. The disk add is nearly done now,
and after that I’ll remove the 4TB disk. Will I still need to scrub, given I will have done 2 re-balances?

(I hope my issue wasn’t hardware… it hasn’t crashed

FYI, I did a several rebalances when swapping out disks and when changing from RAID10 to RAID6. Disabling quotas made everything go much faster.