Can no longer connect to my network?

Very much a newbie here… I tend to fumble into success without much knowledge. I got Rockstor up and running on a dell power edge T430 server, installed Plex Rock-On and have been loving it for a couple of months. Then it went sideways. I replaced my internet provider and Router this weekend and now my server does not appear on the device list of my router and I have no access to the Web-Ui.

I assume, you can also not connect remotely to the server (anymore) to just run
the hostname -I command to get the IP address it is registering under?

Since it seems you have a monitor connected to the server, you can log into the system and using the NetworkManager (underlying framework to manage network connections used by Rockstor and determine the active interface(s) you have by typing:

Identify the interface that has a connection. Use that connection name to review the profile via:

this should give you a screen output with multipe sections. If it’s anything like mine, there will be a list of connection properties, followed by list of properties of the connection type (e.g. 802-3-ethernet), which is then followed by ip4 and ip6 properties. the ip4.method property would show “auto” if it was set to receive its IP address and other settings (e.g. Gateway address) automatically. If it doesn’t, then probably a command line editing is needed (using the nmcli editor). There is a wiki entry for the Networking architecture that you can take a look at:

This is a wikified post documenting the system level logic behind the network interface management in Rockstor. If you are a Linux or NetworkManager expert and like to suggest improvements, please feel free to edit this post or reply. The process described below will take effect in 3.8-8. Code has already been merged into master by pr #884 and available in testing repo. ##User story User can configure network interfaces on the system from the Web-UI. DHCP and Static IP configurations must be …

But I also hope, that somebody else can chime in, especially if there are more effective ways exist to analyze and remedy this.

So if I identify my current DNS listed in my router setup IE: Xfinity DNS. I could go into the nmcli editor and change those entries to match.

Does that sound right.

Based on your response it sound to me that the connection (and associated parameters) was statically defined, correct?
If so, this might be your best option to get back into the WebUI (and then review the settings there, and possibly make adjustments to have the process re-aligned with how Rockstor manages the connections).

Well, Between cold medicine and scotch, still not working. Getting lost in the linux editor functions. I have been messing in nmtui not “nmcli c edit” kinda getting lost.

If any one could point me to the format to tell it my network info that would be great. I think I will go have a shot of Nyquil and Laphroig and battle this beast again tomorrow.

Good luck on the cold medicine/scotch remedy. If it’s of any help, here’s a working interface displayed using nmtui 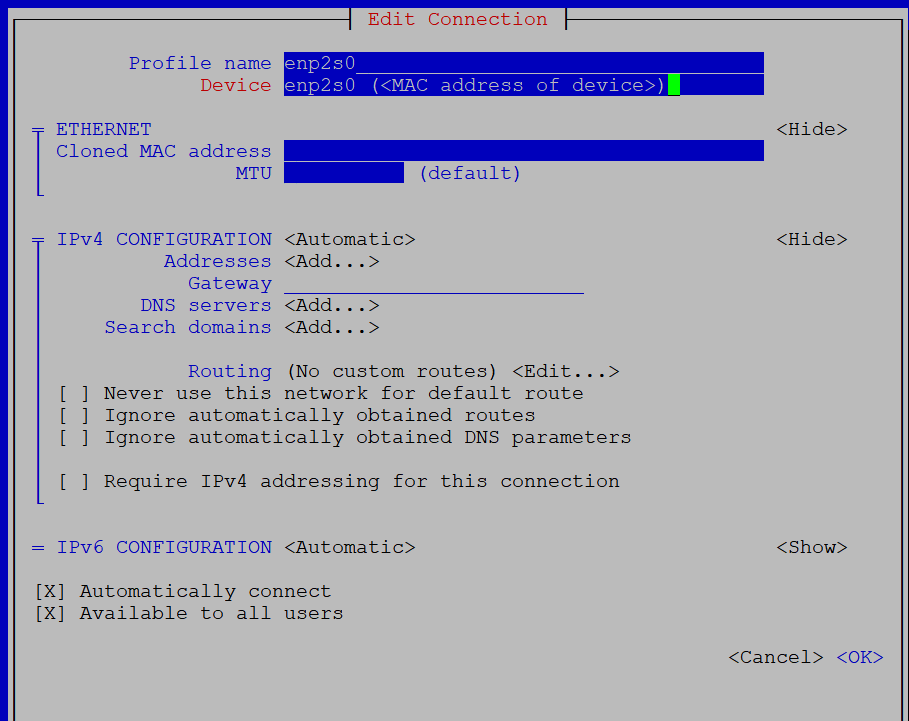 The device name is followed by the actual MAC address (not the placeholder I put there).

As you can see, pretty much everything is set to automatic. I set a static IP in the router as opposed to on the device itself …

well now my ethernet adaptor/connection em1 is showing unavailable…and I can not activate it in the nmtui screen.

@msperos, have you made any more progress on this? Did you mess more with the connection configuration?

Is your network card still recognized by the system, using e.g.
lspci
I assume, one or more ethernet controllers should show up. If none are, then maybe there is a hardware issue …