First off I’d like to say that rockstor and its admin/devs are top notch. Anytime I’ve had a problem its been solved with a quick response. Couldn’t ask for more from the rockstor team. Thank you

I’ve had my machine up and running for probably going on a year and its been pretty awesome. I’ve got some rockons going, one of them being plex which is great. Now, my understanding is that plex can utilize a graphics card for hardware transcoding so I had an extra one laying around (GTX1060) and I threw it in the machine. Started poking around in few forums on how to install drivers but until now I have not gone through with the driver installation other than installing "el repo’ and NVidia detect. Did some more reading and came across some that where reporting that their machine wouldn’t boot up after the gpu driver update, I don’t want to go that route so now I’m here. I know that rockstor’s underlying os is centos so I took that approach when attempting to install the drivers. Just haven’t gone through with the full installation. My question now is, is it worth it to install the GPU and drivers on my rockstor machine for hardware acceleration in plex? If it is what would be the appropriate steps to get the drivers up and running?

Ive recently upgraded my mobo and cpu from an old phenom setup to an I5 8400 for quicksync capabilities. From what ive gathered in this post https://github.com/rockstor/rockstor-doc/issues/214 is that my best bet for Intel QS is to wait for the openSUSE update?

… is that my best bet for Intel QS is to wait for the openSUSE update?

It shouldn’t be required but it’s definitely the way to go I would say as the last CentOS based released is 3.9.2-57 and we didn’t update the elrpo kernel-ml it used for a very long time. Where as our ‘Built on openSUSE’ offerings have an upstream (openSUSE/SuSE) maintained kernel. So in that sense alone you are more likely to get better hardware support/fixes/improvements. Especially for newer hardware. Plus any fixes/enhancements we release of course.

See the following forum thread for the progress on what is currently Release Candidate 6 (4.0.5) released as of yesterday (3rd Jan 21):

4.0.5-0 Released 3rd January 2021 Stable Release Candidate 6 We start the new year off with a slightly belated release of our next Release Candidate. In short this is a big one that includes multiple db schema updates. Rocknets notes/issues Unlike the last few releases this one includes a new feature, courtesy of the venerable @Flox, our intrepid forum admin: Rocknets. These are an extension to our Rock-ons that enables container level docker managed network capabilities, both auto assigned vi…

I’m not familiar with using quicksync myself but as long as you have post 3.9.2-39 it should at least be an option within the Rockon install.

For the nvidia support and it’s associated hardware acceleration elements you are again advised to go the Rockstor 4 route, again for the newer kernel and current OS underneath, i.e. CentOS 7 for Rockstor 3, openSUSE Leap 15.2 for Rockstor 4.

Hopefully others more knowledgable / experienced in this area can chip in as I’ve not tried the Plex hardware acceleration yet myself, although I have a machine lined up ready to try it. As you have gathered the feature itself, within the Rock-ons config area, was added by our forum Admin and major contributor across the board @Flox.

Note that a fresh re-install will be required to move to the ‘Built on openSUSE’ but your existing pool/share/snapshots can be imported in the same way as in the CentOS variant. And if you first save/backup you config (and download it), much of you settings can also be imported. See the following doc section of config save and restore:

I’m definitely excited for rockstor 4 and I’m very much looking forward to updating my machine soon. I will wait until rockstor 4 on openSUSE to go ahead with the gpu install. Thank you for taking the time to help me out!

I second all that @phillxnet said, but wanted to bring my two cents on one point: using the GPU.

I personally do not have a GPU so I never had the occasion to try, but I know that using GPU acceleration in Plex would require you to use a different docker runtime than the default one. Indeed, you would need to install the nvidia-docker runtime and configure the docker daemon to use it. Then you would be able to bind the GPU device and configure Plex to use it for hardware acceleration. As you can probably tell, this is not a particularly lightweight process, and certainly not something that is currently supported by Rockstor; this means you would have to manually do so.

As you do seem to have a CPU supporting Intel QuickSync, I would strongly recommend giving it a try first as you would only need to input its device path at the time of the Plex rock-on install (and then configure it within Plex, of course). I’ve heard very good things about QuickSync and its performance even for very high use. Of course, if you need to run a very high number of transcodings at the same time, it may not be enough, but its simplicity of use when compared to GPU hardware acceleration would justify to give it a try first, I believe.

Of course, let us know how either way will work and don’t hesitate to ask around for any feedback… we’ll try to help as much as we can.

Thanks for chiming in, your help is much appreciated. So I went ahead and attempted to enable HW transcoding with QuickSync in rockstor and in plex but I’m still not getting the magic “(hw)” on my plex dashboard. 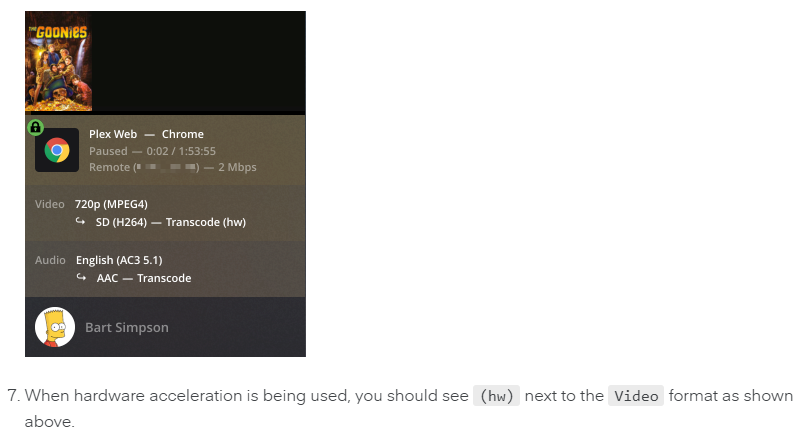 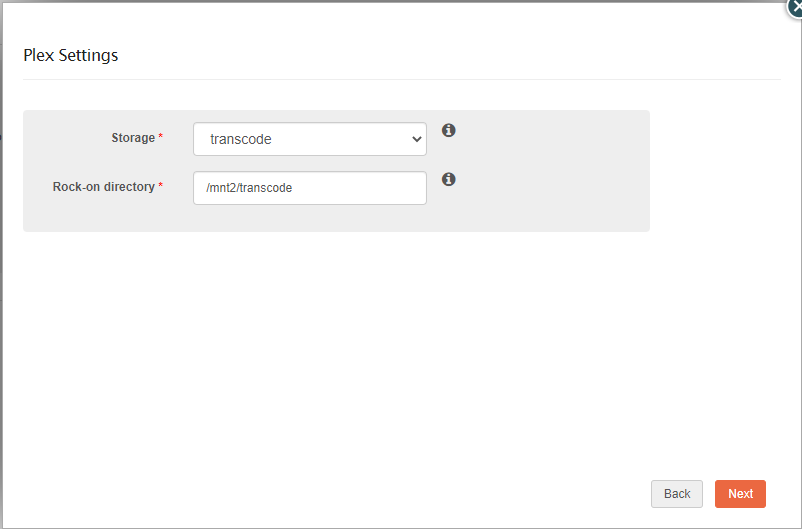 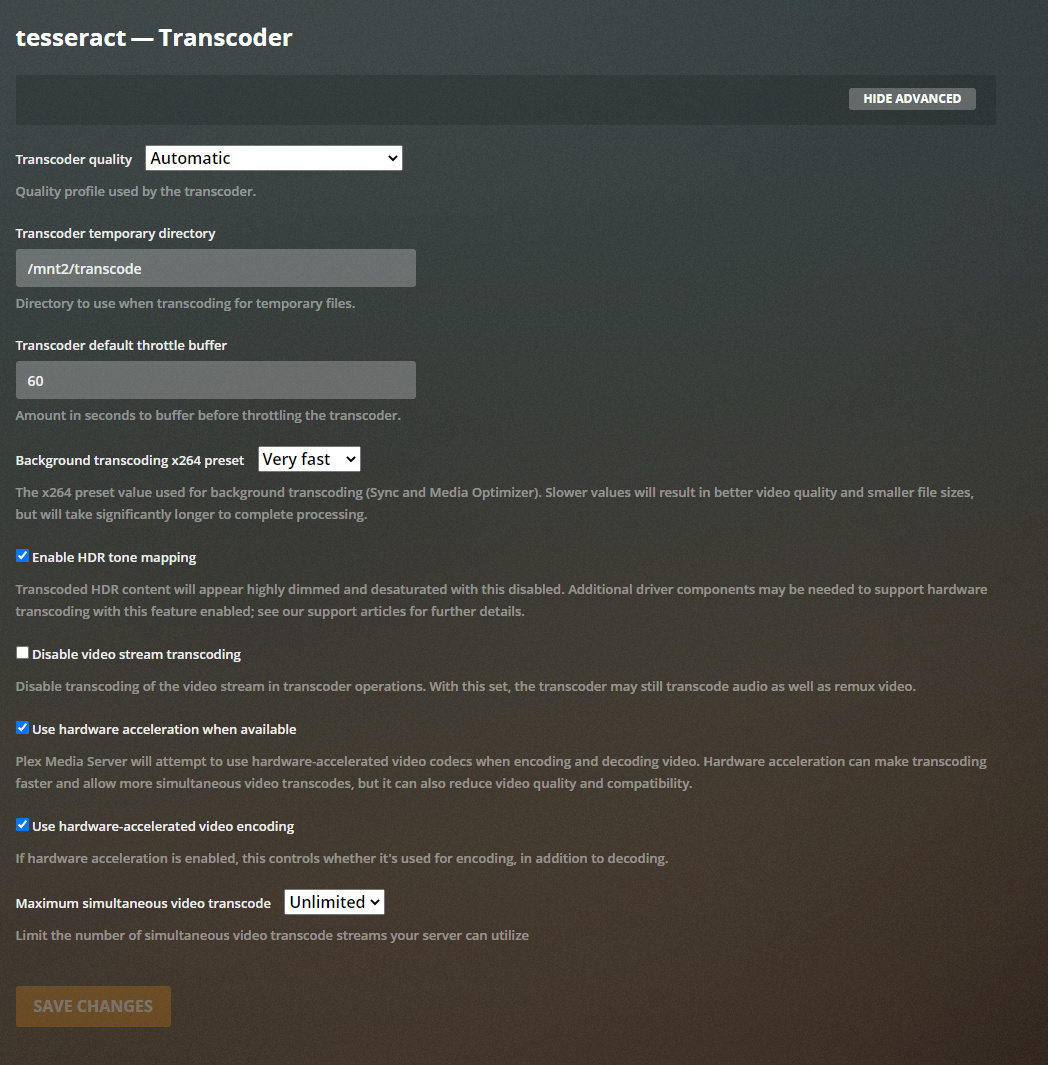 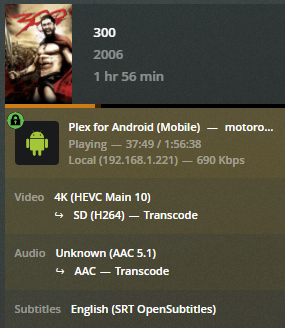 Before all of this I also deleted and re-installed my RockOn share if that helps?
Also Im not 100% sure I set up the transcoding share to the Plex rock-on correctly.
/mnt2/transcode vs /transcode. 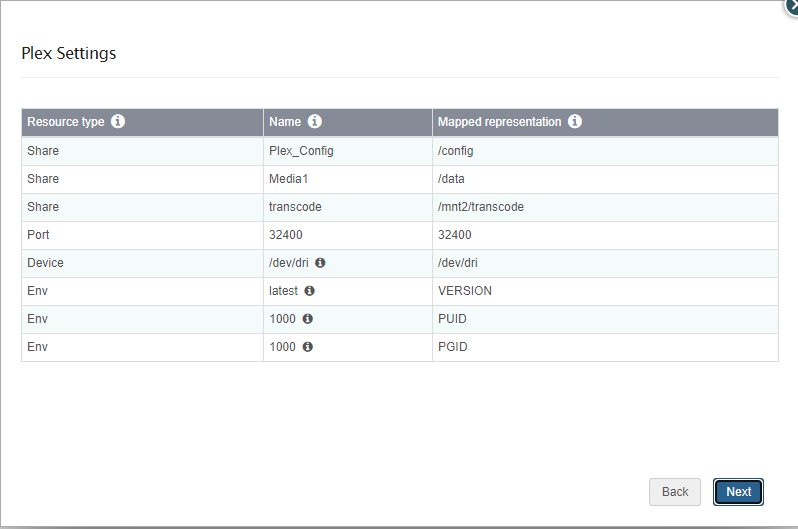 Any input is appreciated!

I unfortunately can’t give you a solution for sure as I don’t have a Quicksync hardware to test it, but I’ll try to see what I can do.

Also Im not 100% sure I set up the transcoding share to the Plex rock-on correctly.
/mnt2/transcode vs /transcode.

Going back to Plex, I would maybe have a look at @Hooverdan’s post linked below as he was the contributor who brought QuickSync support to Plex; they might thus have a better idea than me on what is needed.

Hi, since I’m running a Intel i3 CPU (Skylake) on my setup (so I could use ECC memory, since I thought I’d be using ZFS and FreeNAS, which I ended up not using) I thought I’d take advantage of the QuickSync capabilities to help with the transcoding inside Plex. Now, according to various sources it seems to work fine (showing me that it actually performs transcoding when needed), but am also curious whether anybody solved this differently. I took the original Plex json file and expanded it with …

Otherwise, I would maybe make sure the local dir looks as it should…

… and that all requirements on the Plex side are met, for instance it seems you may need a Plex Pass to use the feature.

Sorry I can’t help more than that at the moment, but hopefully we’ll get to the bottom of it.

Thank for the reply,

So I was able to mess around with my box a little today, I pulled the gpu since I figured there’s no point in having it in there right now if its not being utilized, but now plex has a new problem…

So when I initially ran the command

I did get a result but I didn’t screen shot or save the output, but now that I’ve taken out the gpu I get…

And plex would not install with the /dev/dri option enabled.

This is what came up on the logs.

I was able to get it going without the /dev/dri option though. This all happened after i removed the gpu.

Seems like we’re making progress here as if your GPU was connected during your last test, there might have been some “conflict” between GPU and the integrated GPU (iGPU) so that maybe the system was trying to use the GPU without actually having proper nvidia-runtime for it. All suppositions, though, so let’s try to see what is going on now.

As mentioned before, I unfortunately can’t try that myself as I don’t have the hardware, but from looking online, it seems like a common issue. It might be worth verifying first that the iGPU is indeed enabled in the BIOS, which should activate QuickSync and create the /dev/dri device. You can have a look at this post in the unraid forums, for instance, as it describes the case for a particular motherboard. Of course, it probably differs between motherboards, so I would thus recommend you to check the manual for yours and seek mention of Quicksync/iGPU/onboard graphics, etc…

If all seems OK from the motherboard, it seems it might be needed to activate the corresponding drivers using:

and then check they were activated:

Hopefully this will help move forward a bit.

Sorry, I’m late to the discussion. I have not tried the nvidia GPU transcoding, but this is what I did for the QuickSync on my Skylake CPU. I added a transcode share in this manner: 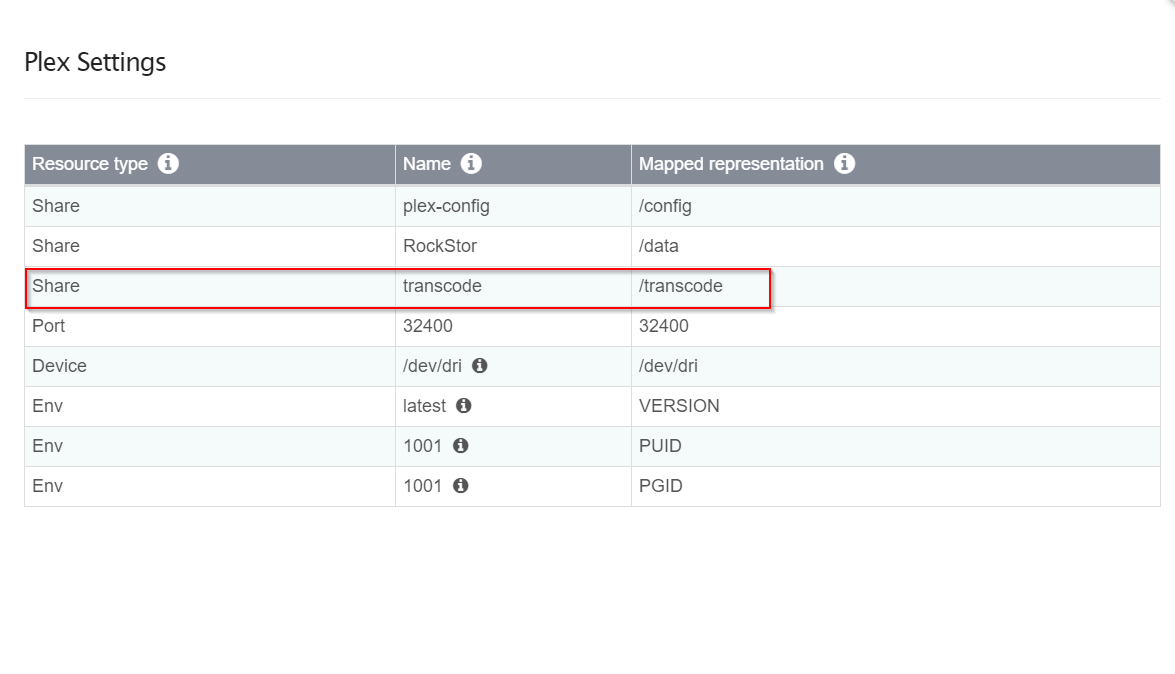 At the file share level (though created through WebUI) that share is located at /mnt2/transcode.
In Plex I am using the standard: /transcode entry.

As soon as the transcoding is started, it will create a sub-directory named “Transcode” (note the capitalization despite the lower case config entry in Plex), and some additional sub-directories (at the least it will be the “Sessions” folder).

and in the dashboard I can see the transcoding taking place: 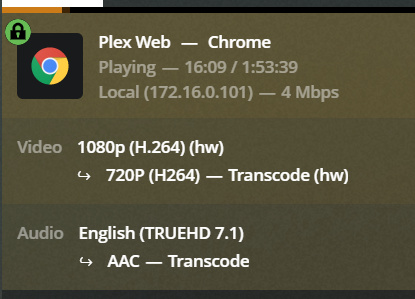 Only one comment on the GPU, in some of my BIOS’es of the past, I was able to explicitly enable/disable external GPU vs. using on-board GPU set. Not sure whether that might work in your case as well…

but no progress still no /dev/dri…

@Hooverdan I will try this for sure as soon as get my /dev/dri situation figured out.

Also, Ive got an m.2 SSD in the mail and will probably end up doing a fresh install of rockstor… Might go ahead and go for rockstor 4 but I’m not 100% sure yet. Maybe with a fresh install /dev/dri will show up? I appreciate everyone’s help

Only other thing I saw was that it might help if you plug a monitor into the Mobo HDMI port … though you might be doing that already, depending on whether you SSH into your server or do it all “in person” …

While this is not Windows

a fresh install could solve your problems … but, as usual that’s no guarantee. BTW, my above setup is still on the Centos flavor of Rockstor, and my i3 is about 2 years older than yours …