Install a GUI on my Rockstor

I would like to install a GUI on my Rockstor media server.
I tried Gnome and KDE but I have the same issue with both.
I tried on a new installation on a VM … Same issue too : 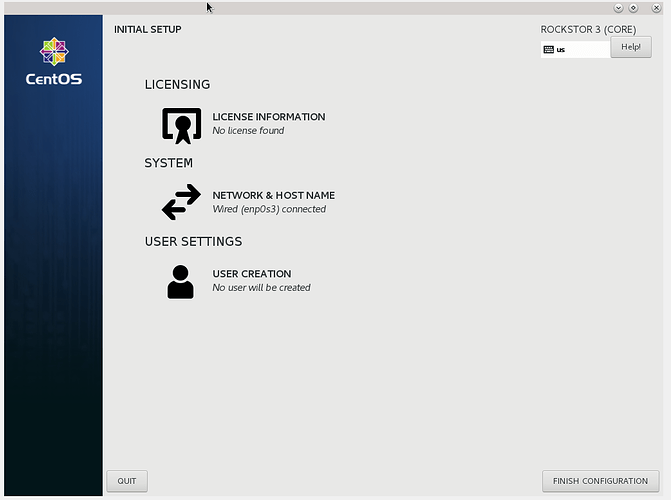 When I restarted the server I have had this screen with “No license found”
If I “Finish the configuration”, the server restart and I have this screen again.
On my new installation on the VM, I success to have my account open on KDE but after restart … This screen appear.

With my server I received an email :

I hope you have any idea about my issue because I need this GUI.
Or any alternative idea than Gnome and KDE maybe.

I’ll spare you the “why on earth would you want to do that” speech.

Some internet people have suggested disabling all initial-setup units.
Here’s a one liner that might sort you out.

That said, it’s generally bad practice to run a GUI on a *nix server, and I dare say is not a supported configuration.

Also, I lied at the start. why on earth would you want to do that?

Thank you for you help, I will test this tonight.

I Have the answer to your big question

:
Because my server is in my living room next to my computer.
I have a video projector too.

Every night, I start my computer connected to the video projector to launch the browser with plex and look my movies and show on my Rockstor. But is it stupid to have my media center + my computer started I think. And my server is a very good machine with sound card etc … so I can directly connect my video projector and my home cinema to my server.

Other exemple : Every night I start my computer to launch the music on my plex server … stupid too I think . I would like to install a small tactil screen connected to my server to launch my music when I’m back to work

If you have some idea to suggest, i’m open

I can certainly see where you’re coming from, however I would suggest that as Plex is designed to run as a client -> server model, it should probably not be run on the same system.

Perhaps something like an Intel NUC, or Nvidia Shield, with plex app installed might be more suited to your application? (I run a shield, previously an MSI Cubi I5, NUC compatible)
Both of these options are designed to be small, and reasonably low power consumption.

I would honestly advise against running a UI on something designed to be run as a headless server.

The Nvidia Shield I find a particularly good option because:

Ultimately, it’s up to you, but it feels dirty, and not in the good way.

I’d like to +1 what @Haioken said, Rockstor is meant as a server, I’d advice against giving it a double role as a desktop as well. Personally, I run the Plex Rock-on on the server (which is in a room upstairs), and use a Chromecast for playback. No (possibly noisy) computers near my TV.

Does the projector have an audio out that you could run a cable from towards your receiver or whatever plays your sound?

Somewhat related: personally I’m quite happy with my receiver that has a bunch of HDMI inputs to which I hook up various things, and one HDMI output which goes towards the TV - of course I don’t know your setup and/or budget, but most receivers nowadays can do this, and it makes things so much easier. Might be something to look into.

it’s nice to see someone else as mad as I am.

there’s not always a rockon for what I want, and to have a remote access to the GUI (couldn’t find how to do it so far)

sometimes there is a glitch but it’s not perfect science