I installed nextcloud as my first RockOn and it worked splendidly. Next I tried to install Bitwarden-rs, and it said it would map port 8881 to port 80, but when I go to the UI using the provided RockOn button post install, it doesn’t resolve.

Any idea why these RockOn port mappings would not be working?

Thanks, and let me know if there is any logging I can provide, or anything I can try.

I believe we are facing two different problems here, so I’ll answer each separately.

Next I tried to install Bitwarden-rs, and it said it would map port 8881 to port 80, but when I go to the UI using the provided RockOn button post install, it doesn’t resolve.

My guess is that you have not setup your SSL/TLS certs as required for this rock-on. If you click on the little “i” icon, you will see the following mention: 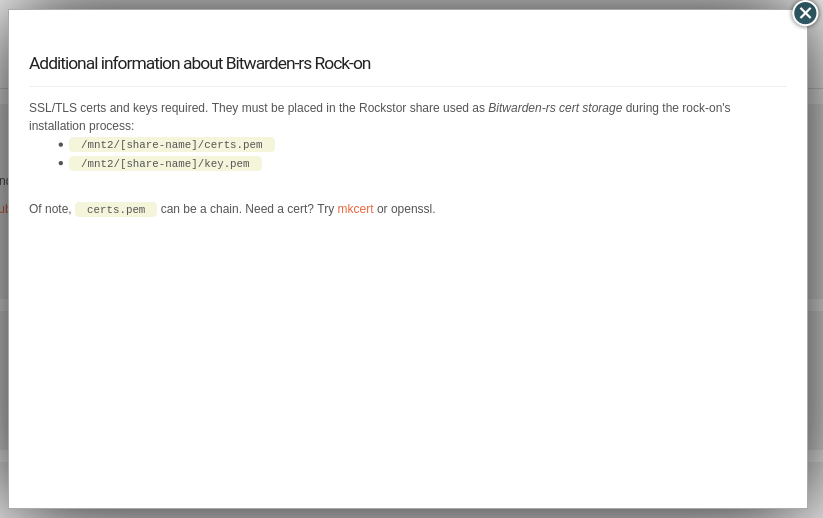 As you can see, you need to provide your certificates otherwise it won’t work. The docker image’s author has some instructions on this (linked below), but make note of its disclaimer: it is recommended to use proper certificates as provided by Let’s Encrypt, for instance:

Here, you are unfortunately encountering a current limitation identified rather recently, in which we are not properly accounting for rock-ons, such as Jellyfin, using docker host networking. While we do have an issue opened for this, the current workaround is to ensure the port you enter during the rock-on install wizard matches exactly what it should be. For Jellyfin, it should be:

The related issue is:

[Rock-ons] Host networking is not accounted for

We have several rock-ons that require host networking for some of their features. Unfortunately, we currently do not account for the...

Note that this is a rather high priority one, so it should hopefully be fixed in the not-too distant future. I myself am willing to address it once I can get some more time to spend on time.

Yep, totally missed the ‘i’ icon info, so thank you. As for Jellyfin, makes sense. I appreciate it.