RockStor Only show 3.78GB of the 8gig install

I’m new to the RockStor World. Been using for a month now but just reallised that only 3.78gig of memory seem to be used by RockStro. 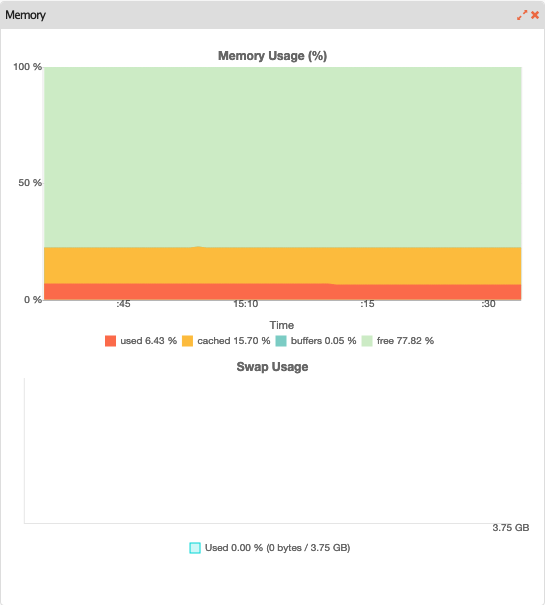 There doesn’t seem to be a problem here as free memory will just be used when needed. Usually by Rock-ons or for disk cache. A more informative output of what memory is being used for can be had from the following command:

During larger disk operations you should see the cached component slowly rise, possibly until it occupies almost all available memory. Linux is quite good that way. However in the sate your machine is in the memory requirement is obviously quite minimal. But the output of your command looks to be normal. Have a look at the output of the above command for more details.

Maybe others could chip in here with some example ‘experiments’ to show this memory being pushed a little more as that would then help to show how some operations will push the memory use up. And would also server to test for sure if our memory widget is not given an accurate story. But in the info given the command line and widget look to tally mostly.

I often watch my 10gigs of ram used up as a highspeed buffer! I love it! I just tested and Rockstor used my remaining ram up to 99% to buffer 4gb video files copy across my 10gig network. for the 20gb transfer, rockstor maintained about 200MB/s (with peaks of 260MB/s) writing to a spinning seagate ironwolf drive! So I’m confident Rockstor makes use of all my ram. I just took this screenshot as well while running a balance (not during transfer).
I am running 2 rockons so I expect they would be responsible for some of the memory usage. but my experience is rocktor has access to my 10gigs of memory.

Hope this helps. Also I couldn’t help but think, you quoted 3.75gb but i don’t see that on your screenshots except for swap memory which isn’t ram usage, but rather system disk usage. 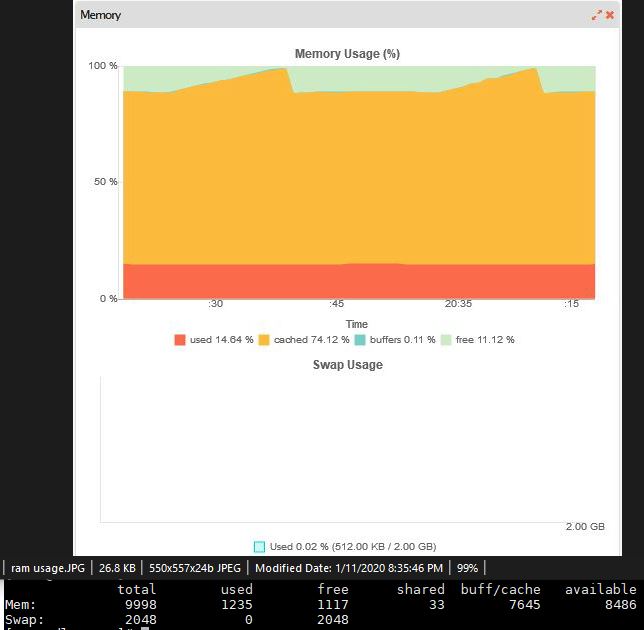 @dlsound Thanks for the input on this one.

Also I couldn’t help but think, you quoted 3.75gb but i don’t see that on your screenshots except for swap memory which isn’t ram usage, but rather system disk usage.

Yes of course, I had completely missed this reference. As you say the lower blank ‘graph’ section references the swap partition. Sized 3.75 GB in @Baguaman case and 2 GB in your case. Thanks for clarifying that. Much appreciated.

@Baguaman as @dlsound noticed this lower graph, with in your case the 3.75 GB size reading, references the swap partition on your system disk. A command line instruction to get this info could be:

The swap partitions size is dependant on hardware factors (disk size / ram size) during install. Swap space is a kind of slow RAM cache. RAM, being extremely fast but volatile, is a precious resource and so the linux kernel tries to make best use of the RAM by stashing/caching unused RAM occupiers into swap instead. But if there is no pressure on the system for RAM, ie there is more than enough (common these days) then swap can remain unused. But it’s still considered good practice to have some as this can make a system more robust to dealing with a RAM pressure situation such as a balance or repair of a btrfs volume in Rockstor terms. Or if you are running many Rock-ons and only occasionally pressure them all at once then the system will just slow down, while it ‘swaps’ RAM to swap space and back to free enough RAM to handle that pressure. Without this ‘fall back’ system something would have to be ‘killed’ by the Out Of Memory OOM killer to handle the same high RAM pressure situation. So swap space is a kind of RAM pressure release valve that can also re-set once the pressure situation has ended. But the OOM killer has no such re-set as what is killed (terminated) will remain terminated until it is re-started. But if all of swap is used as well as all of RAM, then the OOM will again be called upon as an emergency measure.

THanks! The Command helped a lot!