I can no longer start my SFTP service after disabling it from the web UI and replaced 1 drive of a 7 drive RAID 1 pool. Drive replacement was done to increase pool size.

Note: the “Backup” share that I previously served with SFTP now shows as unmounted and with the previous size: 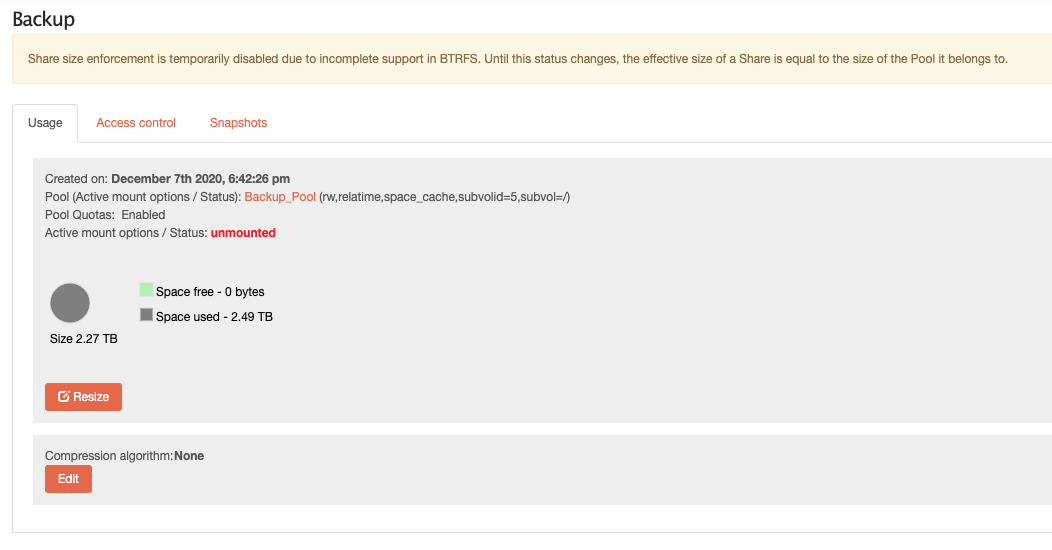 Trying to change the share’s size also shows an error:

Looking further, the share named “Backup” that I used to share via the SFTP service is now owned by root, which makes it so it cannot be shared via SFTP.

Trying to change this back to the user group (“backup”/“backup”) I had before results in another error:

I seem to be stuck with no way to get my SFTP server back online.

Can anyone suggest how to diagnose why I cannot change the ownership of my “Backup” share?

First of all, sorry for the delayed answer; I’ll try to see if I can help.

It seems the failure to start the SFTP service might be a symptom of a broader problem but let’s try to see first what the sshd.service has to say:

or if the output seems truncated (as in not enough lines are displayed to get a good idea of what happened), you can explore (using up/down or pageUp/pageDown keys to navigate):

Now, the reason why I’m wondering whether this is a symptom of something broader is the following:

Note: the “Backup” share that I previously served with SFTP now shows as unmounted and with the previous size:

Could you provide a screenshot of your “Pools” page? Are all shares on this pool also unmounted? Do you have another pool that is also experiencing an issue?

It could also be interesting to see what the following reports:

The screenshot of your pool usage also seems to show no free space, with a used space bigger than total available space, so that might be odd as well. I’m not very familiar with space used, but this in combination with your mention of quotas quirks might be clues. It might thus be interesting to see the following:

I’m sorry for not being able to give you a clear answer, but hopefully that’ll help provide more information on what is happening.

Also, could you let us know what version of Rockstor you are using? From your logs, it seems you might be running an older version. yum info rockstor should give you a clear answer.

Thanks for the reply @Flox. Ironically, a few minutes before your post I managed to get my SFTP server back online.

The main problem I had was that the owner and group for my Backup share somehow had its values stored in the Rockstor database set to “root” for both, even though the values on disk were still correctly set to “backup”. Since they were set to “root” in the database, the SFTP service would not use this share.

When I tried to update the owner/group via the Web UI, it would fail after exactly 2 minutes. My system is an old PC circa 2008 with all spinning disks so it takes a relatively long time to run the “chown” command spawned by this change. I tracked the timeout down to the timeout set for gunicorn requests, but even after bumping that up to 30 minutes to allow the chown to complete, this still failed eventually.

Finally, I figured out how to use the psql command to change the right field in the database to convince Rockstor that this share’s owner/group were backup/backup. For reference in case others need to do something similar:

Once I made this change, I was able to add the Backup share to the SFTP service and everything is now working as before.

I am not sure exactly how I was able to get the STFP server running in the first place, but looking at my SFTP server logs, it was running prior to my Backup share being re-associated with it, causing clients to fail to find the files they were looking for since the share was not mounted.

The main anomaly now is the disk usage shown for the Backup share, although I see the warning at the top of the Shares screen indicating that quotas are not enforced right now so the size of a share is effectively the size of its pool.

The device of the new disk I added also shows up as “detached-0359b48b77c14907a8d3d8bd88ba1d45” which is wrong. I suspect this is because Rockstor did not account for the disk replacement correctly somehow, since the status of the pool when I look from the command line appears to be as expected (the new disk shows up as /dev/sdg).

Here are a few screenshots and command output: 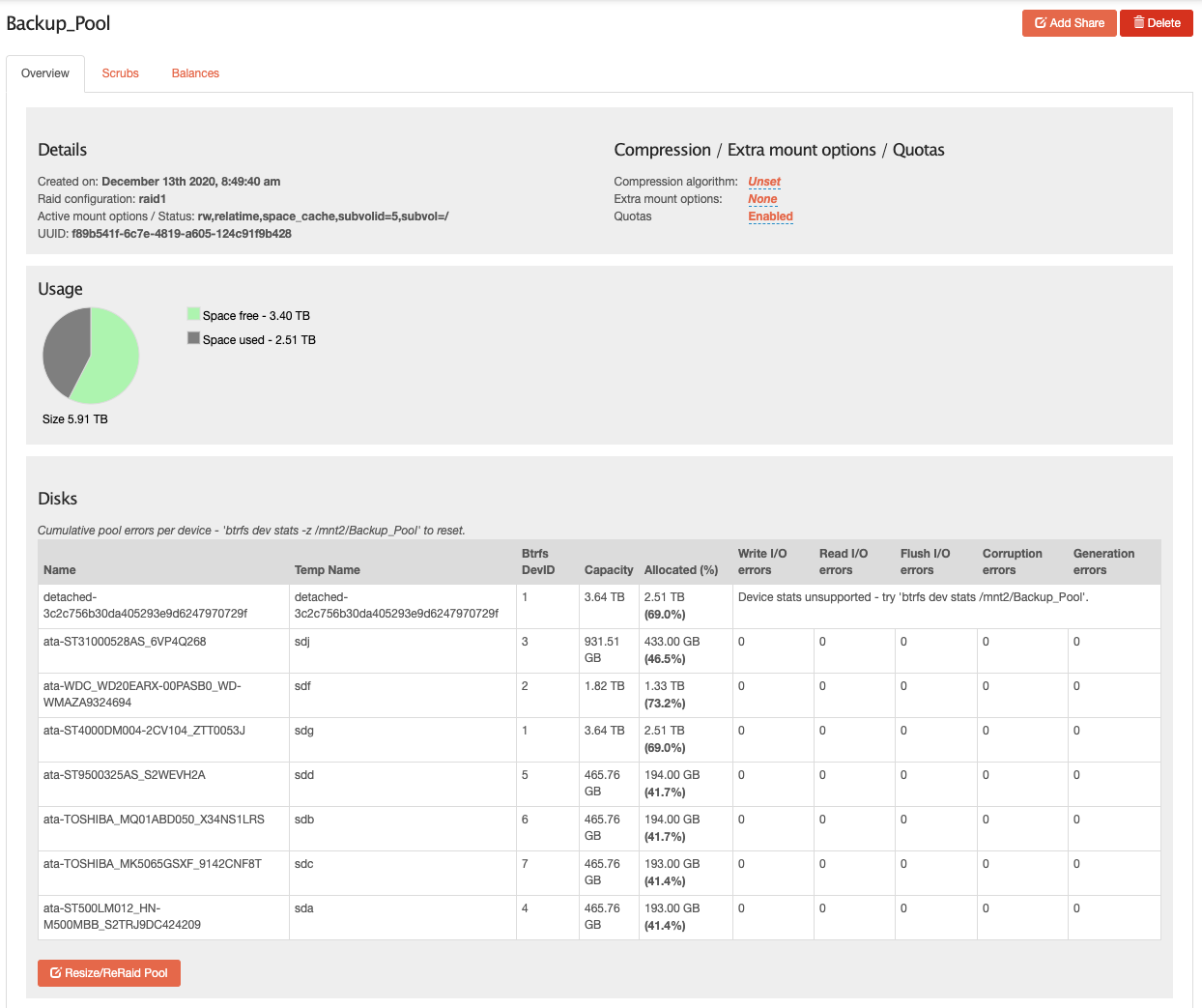 I believe I am running the latest Rockstor from the Stable channel:

Anyways, I am back up and running and the remaining issues appear to be mostly cosmetic.

Perhaps when support for replacing disks is added to the Web UI, these issues will be dealt with.

Thanks again for your response and ideas for what to look at.