How do I modify the WebUI?

Hello folks, I have a very simple issue that I just can’t figure out.
So I have a separate instance of file browser running on port 8080 (because Rockstor doesn’t have a file browser on its own). I want to add a little shortcut to Rockstor menu that will take me directly to the file browser.
This is probably a simple HTML modification, but I can’t for the life of me figure out where the HTML files for the WebUI are located. I tried digging around and thought it’s located at /opt/rockstor/static/storageadmin/ but turns out only the css/js/img files are there, no actual HTML.
Can somebody point me in the right direction here?
Thanks in advance

PS.
I used the browser inspector to create a quick and dirty mockup of what I’m looking for 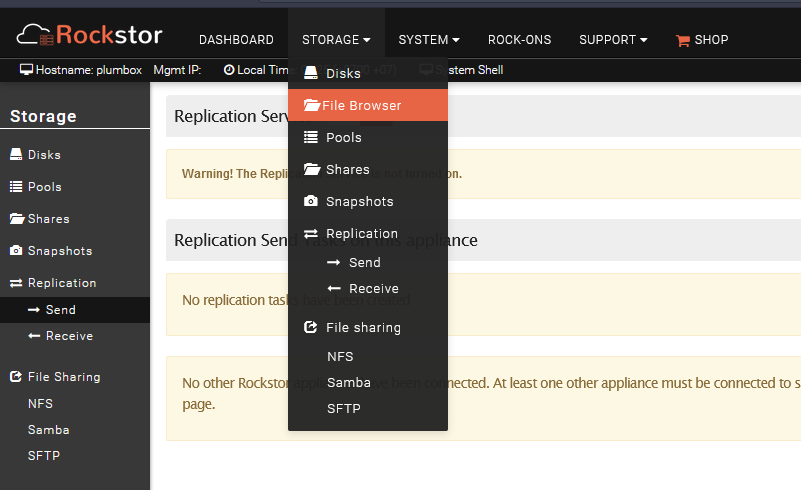 building these isn’t working for me, I’m trying to figure it out

This isn’t my area so I may be completely wrong here, but I would look into the router.js if you try to add a page:

Thanks for the tips guys.
I found the bits of HTML I’m looking for in /opt/rockstor/static/storageadmin/js/templates/common/navbar.jst however modifying them doesn’t seem to do anything. Would love to see some more documentations on how the WebUI work.

building these isn’t working for me, I’m trying to figure it out

Try starting from a source install. But note that updates are not supported and all rpms are considered an update from an source install. And this in turn will necessarily wipe the db as a source/developer install is by default an unknown version. Hence the heavy handedness.

See: Built on openSUSE dev notes and status
Although we have had an upstream issue re pypi changes I think it was that we have yet to update that page to reflect. @Flox found a work around that we have yet to pop into those docs and our other developer docs actually.

It may well be worth opening a new thread to report where this rebuild is failing for you. I know the rpm for example strips our, for size, many of our test. But I think you should be able to rebuild the templates using what’s distributed. Take a look at the following doc section also:

The docs are a current focus, ready for our first v4 Stable release, so we should get to these updates soon hopefully.

If you made any javascript, html or css changes, you need to collect static files with this command:

Can somebody point me in the right direction here?

Further to what @kageurufu & @Flox have already stated. Rockstor is Django, all-be-it an old one. We have the following ongoing issue to drag us into the next testing channel so we can in turn also update our Python 2 to 3:

With reference to "move to python 3" #1877 it is proposed that we begin our Django update 'train' from the current...

That issue will soon be removed from the indicated GitHub milestone as we juggle things towards the official Stable release. I now think that is too much of a change to cram into our current release candidate run.

You can try rebranding the web interface by using configuration parameters