I updated to 3.9.2-57 Yesterday, I do not remember the previous version I was running but I haven’t updated in over a year so I assume it was quite old. After the update I couldn’t access any shares from windows so I did some investigating and found that Samba was disabled, When I try to turn Samba on I get the following error. I also tried to acess my data from SFTP and two shares are completely empty, One of them says it contains 800GB of data. (Note: As of writing this I double checked that the folder was empty, The /export/share folder is, however the /mnt2 seems to contain the missing data.)
I’m also getting Data tables warnings, “DataTables warning: table id=users-table - Cannot reinitialise DataTable. For more information about this error, please see http://datatables.net/tn/3” and “DataTables warning: table id=sftp-shares-table - Cannot reinitialise DataTable. For more information about this error, please see http://datatables.net/tn/3”.
Also this error when I try to edit a shares permissions "Unknown internal error doing a POST to /api/shares/6/acl "
I’m pretty new to linux and unfamilar with Rockstor so any help would be appreciated. 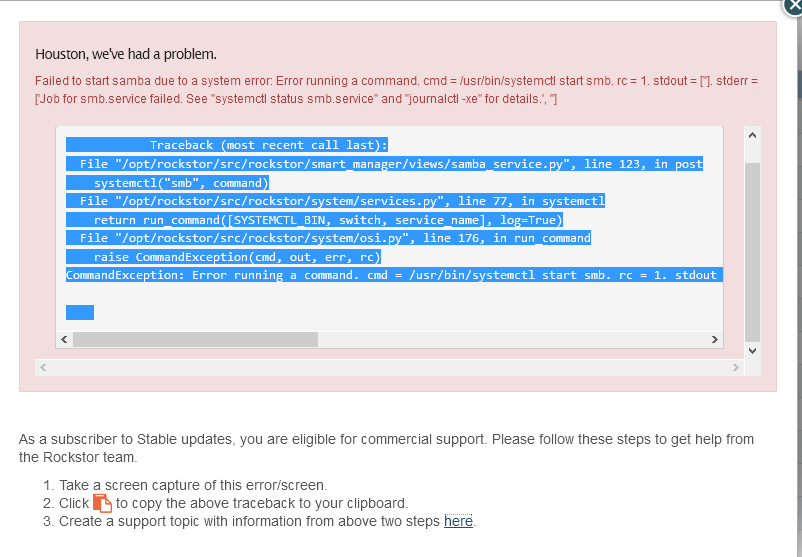 Did you by chance reboot when you thought the update was done. We have has a number of folks reboot mid update; unfortunately this will likely leave the system in an indeterminate state re the package versions. We don’t yet give a good / accurate indication of if an update is ongoing.

This could be the above rebooting during update or we have had a few reports on the forum of failed samba updates from upstream. Take a look at for example:

Failed to start samba due to a system error: Error running a command. cmd 22 Support

@mladams Welcome to the Rockstor community. I suspect that you have already resolved these issues but given the first is a know upstream samba update failure with our now legacy CentOS base and the key to it’s cause can be had via the suggested commands at the end of that error message: Essentially a samba library is known to occasionally fail during our now rather large update set from CentOS, due in part to our rather old ISO. See the following forum thread for how some folks resolved this…

We have a ‘pale’ search icon in the top right of the Web-UI of the forum for other instances of this.

I also tried to acess my data from SFTP and two shares are completely empty, One of them says it contains 800GB of data. (Note: As of writing this I double checked that the folder was empty, The /export/share folder is, however the /mnt2 seems to contain the missing data.)

This is again likely due to a failed or interrupted update. Mounts normally take place on boot so this is consistent with a reboot mid update or a failed package update.

These can be averted by simply refreshing the page within your browser. They come from a difference in what is cached in the browser and what is likely updated on the server end. The browser refresh forces retrieval of the newer version of Web-UI code that likely came with the update and has yet to be retrieved by the browser.

The output, as the error message suggests, of:

should help to diagnose what’s happened here. Not also that if you were upgrading from a very old version then that may well cause other issues. But for now if you post the output, run as the root users, of the above 2 commands that may help to see whats gone wrong.

may well also help in this situation, and if not then it may shed more light on the failed update.