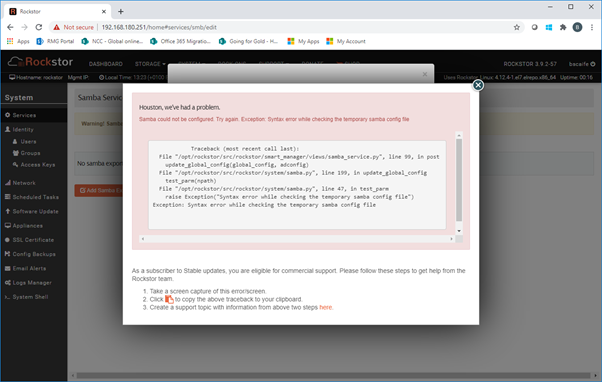 The error you are seeing tells us that samba has detected a syntax error with its config file, as we use its built-in tool testparm to verify that the file is valid.
Now, just to make sure, could you confirm the settings you entered in the configuration window?

Once we have rule that out, we can try to dig a little deeper into what is causing this issue as I couldn’t quickly reproduce it on my end for now.

All I entered was WORKGROUP

All I entered was WORKGROUP

OK… so that’s an odd one, then, as there shouldn’t be any reason for that temp file to be incorrect.

Indeed, the way Rockstor implements the writing of the smb.conf file essentially boils down to writing some required defaults settings, and add to it custom settings set by the user in the “Samba service configuration” dialog window. If curious, the most important bit of that is:

Now, as you can see in the first few lines of this function, all of that is written in a temporary file that is then checked by Samba’s built-in tool testparm before moving the temp file to its final and expected location (/etc/samba/smb.conf). In your case, this verification is failing.
I have to admit that I’m at a loss as to why that temp file is incorrectly written but we can try to see how it looks like and see what is happening, hopefully.

Unfortunately, this temporary file is automatically generated and thus has a random and unpredictable name. I do see a few ways to find out what that name is, however. The simpler (does not require changing code), would be as follows:

Sorry for not being able to give you a more straight answer or solution at the moment, but I’ll admit that I’m puzzled by how that happened. Hopefully that will give us some clues, however.