Some may know, others may not, so here it goes…

I’ve been in the midst of serious medical problems and haven’t been able to work for two years.

As it happens, I am retired now but had planned to keep working. The problem was, my legs were going bad and my feet were going numb. The doctors tried angioplasty and stents and more angioplasty to save my legs, but it didn’t work. Eventually I couldn’t walk across the street or go up my stairs. I also had an aneurysm above the totally blocked junction from the aorta to the femoral arteries in my legs. If it popped, I would be dead in minutes.

My choice was lose my legs or have major surgery. I elected to have the surgery on July 13th this year.

I am happy and sad to report the following:

I can report that NOW I can walk again, but everything else pains terribly. It will be at least 2 more months before I am allowed to exercise and lift over 10 pounds.

The procedure is called

Well, things being how they are, my new computer construction has halted and reporting of some things are about nil right now. Sorry about that.

I enclose a picture 2 weeks after the surgery and a funny. 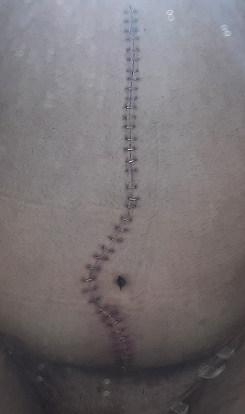 Recently the staples were removed and my friend who drove me to/from the hospital said:

That gave me my first laugh in weeks and it hurt like hell to laugh, but it was worth it! LOL!

I’m still in pain, but slowly healing… another month or two should see me better recovered.

Keep on keeping on!

What an ordeal! Glad you seem to be on a (somewhat rocky) road to recovery. I hope, there will be the day where you can laugh again without crying because of the pain it causes.
“less magnetic” classic!

Wow what a story. This was a close call.
Glad you can walk again.

I wish you strength for the recovery.