Occasionally as a test / dev system I use an old Dell Inspiron 9400 laptop which rather unfortunately is encumbered with ATI/AMD graphics hardware. Until Rockstor upgraded to the 4.2.5-1 kernel the console worked just dandy. However as of this kernel upgrade the console is blank. This doesn’t really affect Rockstor but does rather hinder gathering the ip info from the issue / console message. Anyway in case anyone runs into this problem what is needed is the famous (for ATI/AMD hardware on linux) nomodeset boot option to the kernel.

At the grub screen press the e key to enter the edit mode of the selected kernel.
Then move using the cursor keys down to the line that begins with linux16
Move the cursor to the end of this line using the end key
Add the nomodeset kernel option making sure there is a space before it.
Ctrl x (this should initiate a boot with your edits included)

The following image shows grub in edit mode with the nomodeset options entered as indicated: 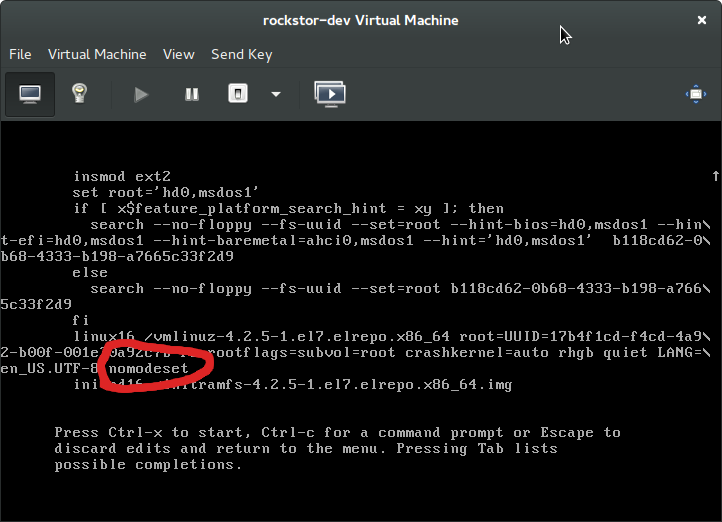 However although this sorts this one boot we need to add the nomodeset option to all future boots, including those after a kernel upgrade. This can be done by the following file edit.

First you must be logged into the Rockstor box as root, either locally or via ssh (ie “ssh root@rockstor-ip”)

Nano is now installed by default in Rockstor and is a friendly text only editor in that it has constant on screen instructions across the bottom of the display.

Change the following line in this file to add the bolded kernel option indicated below:

The following image shows nano with this edit in place:

For this change to take effect it is necessary to run one last command:

The system should now automatically add the nomodeset option to all future boots.

N.B. in another thread it was pointed out by @sirhcjw that removing the rhgb option fixed a boot problem in a much earlier version of Rockstor but that was a different problem and didn’t help here.

Hope this helps someone.

I am reluctant to suggest that this be added by default as it may well be fixed in future kernels and in my experience has only ever been necessary on certain hardware. I will update this post on my findings with the next Rockstor kernel.