Just a query based on my recent observation really. Any idea how accurate the Network Widget is on the Dashboard? Since rebuilding my sadly defunct elderly AMD64 box with a relatively inexpensive mini ITX board based on the Celery J3455 I’m getting far superior data rates than ever before (Realtek onboard NIC). Here’s a screengrab of the network widget from earlier today when restoring a lot of videos back to my Rockstor from a humble WD Mycloud using rsync directly between the two devices: 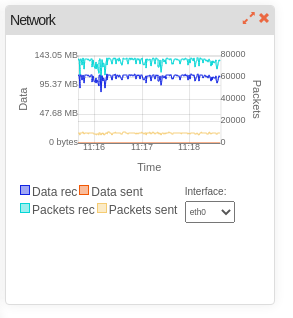 Now, the X axis time clicks are (I assume) every second, so that’s giving me quite a good data rate. Yes? No? Smaller files give lower rates of course, but still rarely below about 50MB/s.
I’m not reading the widget graph incorrectly, am I?

I read that at showing around 94 MB/s + Data received and around 75000 Packets received / second.
Unless I’m reading it wrong of course. We also see a around 1000 Packets send / second send and near zero data sent. This looks to be consisted with a Gigabit link mainly receive as you describe.

@phillxnet Yes, makes sense, although I think I was reading the numbers even higher than you mentioned. Either way, a good result in my book.
Things are looking very stable and consistent for both my X86_64 and Pi4 Rockstor installs. Fit and forget, which is what I wanted within reason.
Any sign when v4 will go showtime?

Apart from the strange times we now live in, which has inevitable affected Rockstor’s development a tad, we are awaiting a fix for our currently broken Active Directory, i.e.:

Brief description of the problem I’m trying to join Rockstor to my AD domain, but it is erroring out. Detailed step by step instructions to reproduce the problem I filled out my Active Directory configuration on the services page and then clicked to start the service. I then get the below error. Web-UI screenshot [Capture] Error Traceback provided on the Web-UI Traceback (most recent call last): File "/opt/rockstor/src/rockstor/rest_framework_custom/generic_view.py", line 41, i…

We don’t yet have an issue for this but @Flox has been considering our options re AD and it very much looks like we are going to revert our previously reverted sssd move. See the somewhat out of date docs re our prior move to sssd here:

This is a wikified post documenting the implementation of Active Directory integration in Rockstor. It was done differently before version 3.8-9 using winbind as described here. This new approach uses sssd and is a much simpler and recommended one as per RHEL/CentOS documentation. ##User story and implementation summary User should be able to add their Rockstor system to their Active Directory domain controller. We use realmd, which provides and simple way to discover and join Active Directory…

So in short we are going to have another go at moving to sssd given it’s progress in the mean time. Post fixing this rather late but significant find I think we can more clearly offer up Rockstor 4 as having mostly feature parity with our prior CentOS offering. This should minimise the surprises for those awaiting the next stable with the assumption it can pick-up anywhere our CentOS offering left off. I’d also like to get our unit tests a little more in shape as we still have some silly failures on the 'Built on openSUSE side when we had intended, prior to the next stable release, to ensure we had the exact same unit test coverage that we had post:

This will also help use to ensure a smooth migration for those moving from our last CentOS stable (3.9.2-57) to what will be our first Stable Rockstor 4 release.

But bar the AD stuff it does look to be shaping up quite nicely. Although the AD failure did highlight that we do need more wide spread testing which is exactly what we are now getting. So bar a few more ducks in row we are looking at an early 2021 release I think. All depends on developer time re the AD and shaping up the unit tests and tending to anything else we need to get sorted. @Flox has also submitted a much antisipated docker networking pr that I’d also like to get in before our initial 4 release, simply because it is so extensive and it would be challenging to leave it too long and could end up costing more time to get this in if we leave it much longer. So when I next get enough time to properly review this docker networking pr I’m hoping to pop this into testing for a bit with the hope we can get it out for our first 4 release later. That way we start as we mean to go on with that capability built in. And given it paves the way for tending to some other outstanding Rock-on short falls that seems to make sense. But again, all down to finding the quality time and but bit by bit and we should get there.

So in short we will have to have a little run in testing again first to address the above and then we can do our first official 4 release. Quite looking forward to this myself. It’s been a long journey and I’m eager to start our next one re the Python 3 and other technical debt stuff in our subsequent testing run.

Hope that helps and thank a ton for all your cross arch feedback, much appreciated.